I Had a Comrade

I Had a Comrade - Stories about the Bravery, Comradeship, and Commitment of Individual Participants in the Second World War  is a limited edition of 2,450 copies.  The 400 page hardcover has the same high quality materials you've come to expect from Loden Books. I Had a Comrade and The Oranges are Sweet will look swell side-by-side on your bookshelf.

What our readers say about I Had a Comrade

Dr. Daniel Haulman, Chief Historian, Air Force Historical Research Agency: "I very much enjoyed reading your book I Had a Comrade regarding the experiences of those in combat during WWII.  It is an excellent collection, and I recommend it be read by others. Those who served in WWII, or their descendants, such as I, would be especially interested. Because of its variety, it would have something to appeal to almost everyone interested in WWII."

​Jerry King, retired Royal Air Force group captain: "I have finished your second masterpiece. It is great that you took the stories and put them together so well: a bonus for the families and for historians. Excellent quality presentation. Bravo!"

Chris Mattie, Chief pilot, Philadelphia Flyers NHL hockey team: “This book gave me a real look into the lives of pilots of whom my father [John Mattie] spoke of so often, among those Wah Kau Kong and James Cannon. To see my Dad's name in print next to Don Beerbower and this group of GREAT AMERICANS makes me real proud. . . . I cannot thank you enough for recreating their incredible lives and the era in which they were brought up in.”

. . . [in] this diligently produced collection. It’s exciting stuff to read about."

The following excerpt from Paul's Introduction tells you about the ten riveting stories in I Had a Comrade:

"I have known since my military service in Vietnam that comradeship between people during wartime is quite different than close personal friendships at other times in life. Our English words don’t adequately define the selfless, trust-based, sacrificial love that is intensified by warfare. Veterans find it difficult to explain this unusual emotion to someone who has not served in a combat theater. In I Had a Comrade I try to give the reader an understanding of comradeship through the stories of people I have personally interviewed or, if deceased, have come to know through their families and friends.
Since 1995 I have been interviewing people who lived during World War II. While researching and writing The Oranges are Sweet – Major Don M. Beerbower and the 353rd Fighter Squadron: November 1942 to August 1944, I talked to numerous people about the air war in Europe. Since the book’s publication in 2011, I have continued to interview the diminishing number of men and women whose lives were altered by the tragedy of that war.
Major Beerbower is a common thread linking the ten stories in I Had a Comrade. He either knew, served with, or was otherwise connected to the people in this book. Although aerial combat in the European theater is the primary backdrop for I Had a Comrade, the stories also include action in the Pacific, soldiering across Germany, sacrificing on the home front, life in a wartime village in Bavaria, and the gracious appreciation of the liberated people in a small commune in northern France."

In I Had a Comrade the reader will meet:

We are pleased that REDPINE Studio illustrator Ron Finger, creator of the stunning image of Major Don Beerbower’s P-51 Mustang Bonnie "B" II for The Oranges are Sweet, is responsible for the dust jacket artwork for I Had a Comrade.

In Pony Express a pair of Mustangs flown by First Lieutenant Don Beerbower and his wingman, Second Lieutenant Wah Kau Kong, rise from an overcast as they depart England for a mission to Bremen, Germany, on December 16, 1943. Pony Express represents the urgency of using the Ninth Air Force’s new long range Mustangs to protect Eighth Air Force heavy bombers bound for Germany. Beerbower’s and Kong’s tight formation flying also illustrates the special bond forged by the pilots as together they safely navigate through dense cloud cover to face the unknown dangers that lie ahead.

In Pony Express Don Beerbower is flying his first P-51, Bonnie "B". It lacked the internal fuel tank that came with the modified Bonnie "B" II.

I Had a Comrade's Foreword is by Lieutenant Colonel Richard E. "Dick" Cole. Dick was Jimmy Doolittle’s co-pilot on April 18, 1942, when the pair led sixteen North American B-25 Mitchell bombers off the deck of the USS Hornet. The Doolittle Raid became one of America’s most famous military actions.

Dick and Paul first met in 2014 at the Wings of the North Air Expo at Flying Cloud Airport in Eden Prairie, Minnesota, where they participated with other VIPs answering questions from attendees about their military service. Sadly, Dick passed away at 103 years of age in April 2019. He was the last of the Doolittle Raiders. 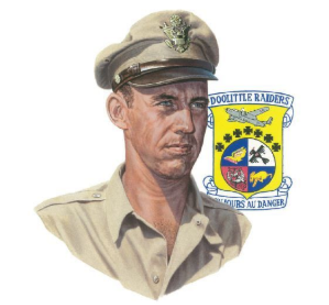 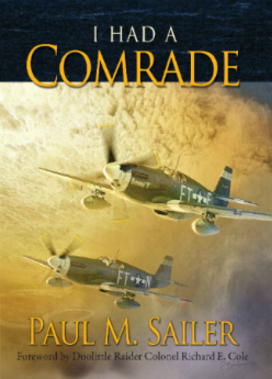 ​​​This image of Richard E. Cole is made available through the courtesy of artist Jay Ashurst and the Gathering of Eagles Foundation