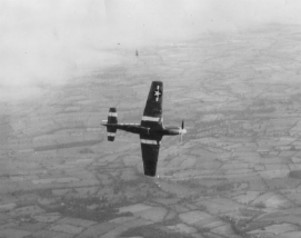 Don Beerbower's final engagement on April 8, 1944, was especially difficult. He later described it to Gordon Gammack, a war correspondent for the Des Moines Register:

“On the first two enemy aircraft I shot down, the pilots didn’t get out but I didn’t care about that. The third one was different. That fellow put up a real fight. It must have lasted 10 minutes. The first time I hit him, he dumped his cockpit canopy and I sort of let up to give him a chance to bail out. Usually when a pilot dumps his canopy, he does it so he can bail out. Then he went at me again. And he was really flying around there, too. But I got his engine and then he did jump. But the chute never opened. I really felt bad about that. Normally we don’t think about this business on a personal basis. You don’t dare. But that time I got a bit of a twinge. He gave me the best fight I ever had.” 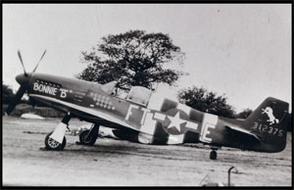 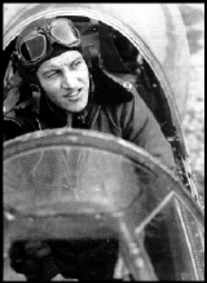 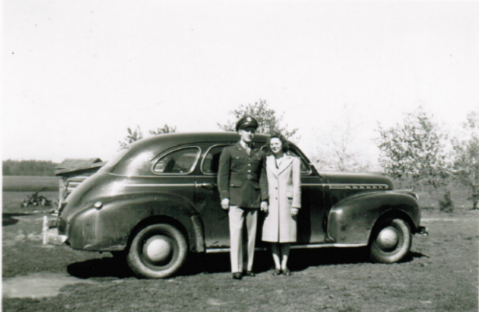 All too soon the furlough came to an end. A final photograph was taken of Don in his uniform-a rich, dark-olive "loden" green jacket with accompanying light taupe shirt and slacks, or "pinks" as they were called-and Elayne in a stylish Chesterfield overcoat and dress, holding hands beside her father's 1941 Chevrolet Special Delux.  They left the Kutcher farm and drove into town. Don's parents, very concerned about his flying in combat, said their last goodbyes as the young couple boarded the bus that would take them to Minneapolis. It left Hill City on U.S. Highway 169, skirted Quadna Mountain south of town, and crossed Willow River meadows, where Don had hunted deer several years earlier. As they rode over the familiar peat bogs of Aitkin County, Elayne sensed that Don would not be returning home for a long time. All across the country, husbands and wives were making similar last trips together. The war was pulling people toward it as a vortex draws fragments to its center. The feelings of love, worry, and fear that bound these couples to one another resisted the heartbreaking inevitability of separation caused by this powerful, swirling force. Like all the others, Don and Elayne had to overcome the emotional torment stirred by these intense moments in history. As they tearfully parted at Wold-Chamberlain Field, Don's true destination remained secret. How long he would be away, or whether they would ever be together again, were questions no person could answer.

Elayne spent the night with her aunt, Adeline Kutcher. She returned the following day, alone, to Hill City.

The Oranges are Sweet 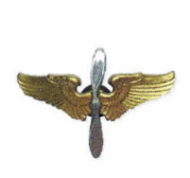 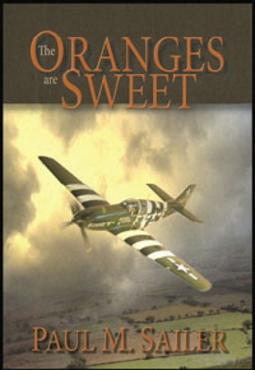 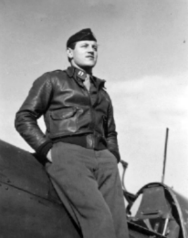 The new Special Edition of The Oranges are Sweet  commemorates the ultimate sacrifice made by Major Don M. Beerbower in 1944. This limited edition of 1,504 copies contains information from Paul Sailer’s fascinating visit to England and France in 2014, new photographs, images and text, upgrades to all maps, and additional primary source material from the author’s ongoing research since the book’s first publication in 2011.

The Oranges are Sweet is a deeply moving story about 22 year old Major Don M. Beerbower and the men who served with him during WWII such as John Mattie, Wah Kau Kong, Bud Deeds, Willie Y. Anderson, and James Kerley. When Don died near Saint-Thierry, France, on August 9, 1944, he was the leading ace in the Ninth Air Force with 15.5 aerial victories and the commanding officer of the 353rd Fighter Squadron. The Fighting Cobras, as the unit was known, ended the war with more aerial victories than any other squadron in the United States Army Air Forces.

Critical Reviews of The Oranges Are Sweet

“[The Oranges are Sweet] is really a fine work . . . Beerbower’s story is little known, and deserves great publicity. Paul Sailer has done an amazing job, obviously one that is a labor of love for him, in bringing together so many sources, in weaving them together into a compelling tale that illuminates life in Minnesota in the pre-war period, for those in the service being shipped out, and for those in the terror of combat. He combines clear, accurate writing with wonderful diary entries, letters, and personal remembrances and a series of photographs to help bring to life the story he is recounting.” Charles M. Dobbs, Ph.D., Professor, Department of History, Iowa State University, Ames, Iowa

“More than six decades after the end of World War II there are dozens of books about the war published every year. . . . Paul M. Sailer’s The Oranges are Sweet is different. It is the story of Don Beerbower, the leading ace of the Ninth Air Force, his boyhood, his training as a pilot, his months of combat, and his death. . . . The experience of men flying in combat has been put together by Sailer from scholarly works, memoirs, the letters home of Beerbower and his comrades, and by the interviews and correspondence with the survivors. It is a masterful job of research, giving us not only the ‘big picture’ but the small moments and the little details that recreate the lived experience of these fliers. That experience is put into the larger context aided by a series of very clear maps.” Roland Dille, Ph.D., President emeritus, Minnesota State University, Moorhead, Minnesota 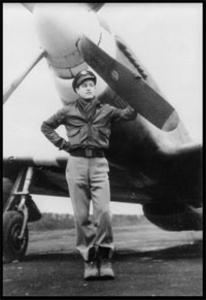 "We hope you enjoy these excerpts from The Oranges are Sweet."

What our readers say about The Oranges are Sweet:

It is well worth reading.”

Dr. Michael Martin, Wisconsin historian and Civil War author – “The last book on the air war in WWII that I added to my library was Donald Miller’s Masters of the Air, and while that was a superb read, The Oranges are Sweet is easily equal to, if not superior, to Dr. Miller’s effort.”

Arlene Beerbower, sister-in-law – “Everything about the book is extraordinary! The paper is such a nice quality and easy to read print. The cover is a work of art also. The background information is so real and exactly as I remember it. . . . I truly admire your dedication and accomplishment with complete and factual records of it all.”

Hester Kong Neff, sister of Wah Kau Kong, the first Chinese American fighter pilot to serve in the ETO – “I found your book so very well researched and written. It invoked me emotionally to learn Wah Kau was a friend of Major Don M. Beerbower.”

Captain Tom Foster, former U.S.A.F. C-130 Hercules pilot – “Reading history is something I do a lot and yours is the best book I've read in a long time.”

Jim Borden, retired Northwest Airlines pilot – “It is one of the finest books I have ever read.”

Bud Deeds, Beerbower’s last wingman – “I will treasure the book for the rest of my life.”

As Major Don M. Beerbower led the sixteen Mustangs of the 353rd Fighter Squadron past the old provincial capital of Reims, he could see an enemy installation several miles in the distance. Nestled in among vineyards and wheat fields near the village of Saint-Thierry lay former French aerodrome Base aerienne 112. This large complex had been under German control since 1940 and went by the Luftwaffe name Flugplatz A213.

Cruising at an altitude of six thousand feet, Beerbower gently guided Bonnie "B" northeasterly as the squadron rapidly approached the potential target three miles beyond the city. As the pilots scanned the airfield below, they noticed at least thirty twin-engine aircraft parked in revetments. The squadron commander made the decision to attack.

A recent comment by the St. Paul Pioneer Press:

"Odds are, you’ve never heard of Don M. Beerbower. After you read The Oranges are Sweet, you’ll wonder why you’ve never heard of this courageous Minnesotan, considered by many to be the greatest fighter pilot in the European theater during WWII. . . . The Oranges are Sweet is an extraordinary book, featuring 200+ photos and illustrations, 11 maps, and a compelling story of this brave man and his life in pre-war Minnesota [and Iowa]."

Max LaBarre, C-17 Loadmaster, U.S.A.F. – “Thank you for . . . writing such an excellent book. It gives me a great sense of pride that I’m serving under the same great air force [as] Major Beerbower.”

The 353rd Fighter Squadron was one of three squadrons of the famous 354th Pioneer Mustang Fighter Group, Ninth Air Force. Along with its other two squadrons (355th and 356th), the Pioneer Mustangs made aviation history by flying the first combat mission in the P-51B/C Mustang on December 1, 1943. In The Oranges are Sweet, the author uses many primary source documents, numerous pilot and ground crew interviews, letters, and personal memoirs to tell about the men and machines that went to war with Don Beerbower.

“Beerbower was one of the finest. He was quiet, athletic and absolutely fearless. . . . We were deeply saddened by [his] loss. . . . I considered him the greatest fighter pilot in the European theater. I’m sure that if it hadn’t been for his untimely death, he would have gone on to be America’s top ace.” Brigadier General James H. Howard, Roar of the Tiger (Howard was the only fighter pilot in the European theater to be awarded the Congressional Medal of Honor.)

“After thirty-seven years of service and three wars and having arisen to four star rank, I attribute a large measure of my success to my initial service under Major Beerbower.” General Felix Michael Rogers, letter to the Minnesota Aviation Hall of Fame